Samsung Galaxy F52 5G design and specifications have been apparently leaked in a Google Play Console listing. The Smartphone was seen on China’s TENAA certification website and it was found on the Bluetooth SIG portal listing last week. It is rumored that the smartphone may come with Qualcomm Snapdragon 750G SoC processor. The leaks suggest that the smartphone may feature a hole-punch display design with a chin at the bottom. 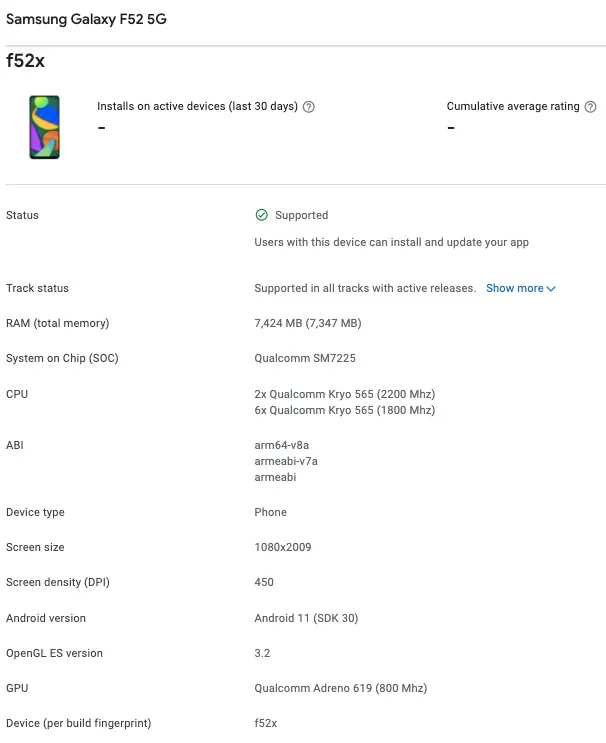 According to Google Play Console listing, the Samsung Galaxy F52 5G may arrive with 8GB of Ram and with Qualcomm SM7225 Processor that is Snapdragon 750G SoC. The smartphone may flaunt a full-HD+ display and may run on the Android 11 Operating System with Samsung One UI.

There is a 64MP Primary Camera at the rear along with a 12MP Ultra Wide Angle Lens, a 5MP Macro Camera, and a 2MP Depth Camera. Other features include Face detection, Autofocus, LED Flash, HDR mode, ISO Control, Continuous shooting, and Auto Flash. For selfies, It has a 32MP Camera.

Samsung Galaxy F52 5G was also found on the Google Play Supported Devices list with the model number SM-E5260. The same model number appeared on the TENAA and Bluetooth SIG websites. According to the TENAA listing, the smartphone may sport a 4,500mAh battery and a quad rear camera setup. There is a buzz that the Galaxy F52 5G may feature an in-display fingerprint sensor and supports 25W quick charging. The smartphone weighs 199 grams and the dimension measures 164.63×76.3×8.7mm.

Accurate information about the launch date of the Samsung Galaxy F52 5G is not yet revealed. However, according to the information available, the phone is expected to debut soon.