Samsung has launched the latest device in the Galaxy A series of smartphones with the launch of the Samsung Galaxy A32 in India. The phone has been launched in the mid-tier category of smartphones. The phone includes a Quad Camera setup on the back and a 90Hz display. The camera on the back is a 64-Megapixel sensor. The device also comes with Dolby Atmos support. The phone was launched in select global markets in 4G and 5G options as well. Unlike in India where there is no 5G support provided with the device.

Samsung Galaxy A32 Specifications And Features

The Samsung Galaxy A32 features a 6.4-inch full-HD+ Super AMOLED Infinity-U Display. The display also comes with an aspect ratio of 20:9, a refresh rate of 90Hz, and a peak brightness of 800 nits. The smartphone is powered by the octa-core MediaTek Helio G80 SoC coupled with Mali-G57 MC3 GPU. In terms of RAM, the phone comes with up to 6 GB of RAM.

Coming to the camera, the Samsung Galaxy A32 has a Quad Camera setup on the back. The primary sensor is a 64-Megapixel lens having an aperture of f/1.8. The secondary lens is an 8-Megapixel Ultrawide lens with a 123-degree field of view. Other sensors onboard include a 5-Megapixel macro shooter and a 5-Megapixel depth sensor lens. On the front, the phone has a 20-Megapixel camera sensor to take selfies and attend video calls. 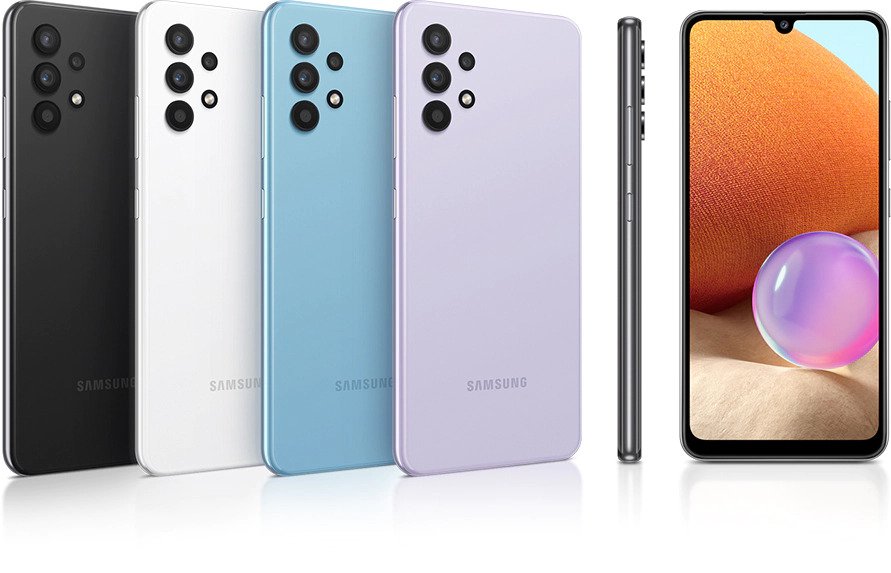 The phone also has several sensors including an accelerometer, ambient light, gyroscope, magnetometer, and a proximity sensor. The device also features an in-display fingerprint sensor.

The Samsung Galaxy A32 houses a 5,000mAh battery with support for 15W fast charging. The phone is claimed by the company to deliver up to 20 hours of video playback on a single charge. In terms of dimensions, the phone measures 158.9×73.6×8.4mm and weighs 184 grams.

Samsung Galaxy A32 Pricing And Availability In India

The Samsung Galaxy A32 has been priced in India at Rs. 21,999 for the 6 GB RAM + 128 GB storage variant. The smartphone will be coming in Awesome Black, Awesome White, Awesome Blue, and Awesome Violet color options.

The phone will be available through major retail stores throughout the country. It will be also available on Samsung.com, and several online retail stores as well. Samsung has also come up with launch offers for the device in partnership with HDFC Bank to provide an Rs. 2,000 discount HDFC Bank credit card, debit card, and EMI transactions.