The Xiaomi Mi Band 5 is scheduled to launch on June 11 and we’ve already got the first official look at the fitness band now. On its Weibo page, Xiaomi revealed the poster showing the wearable fitness band in four colours — yellow, red, green and black.

The image below of the official Mi Band 5 shows that its design hasn’t changed much compared to the Mi Band 4. It has the same pill-shaped display, although with a larger screen area and maybe reduced bezels. The band appears to have that similar capacitive button underneath its rumoured 1.2-inch AMOLED display if you look closely. Also, the silicone strap is exactly the same as the previous model. 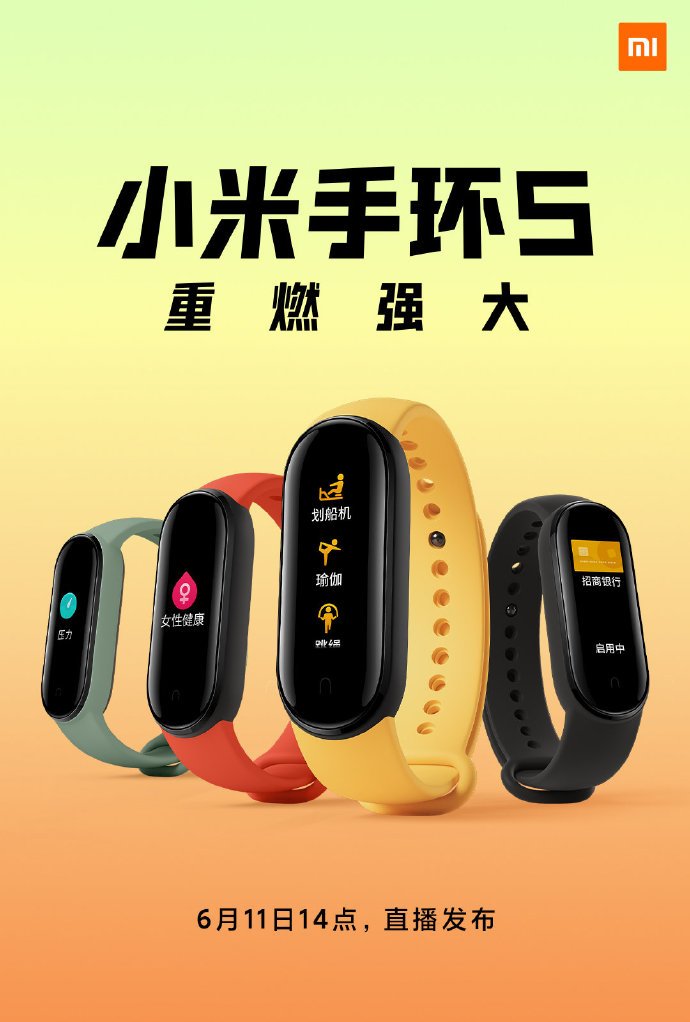 Xiaomi did mention about NFC support in the Weibo teaser and it’s speculated that this time only the band’s global variant will get the feature.

In addition, the image of the Mi Band 5 confirms that it will get tracking for activities such as yoga, rope jumping, elliptical machine, indoor cycling and skipping. It also shows tracking for women’s health, which is something we have heard of before as well.

In our previous post, we did mention about the existence of a menstrual cycle tracking feature and a SpO2 reader for stress and breathing tracking. The SpO2 could read the blood’s oxygen saturation level. In these days, it is quite a useful and fascinating feature plagued by the Coronavirus.

One of its most anticipated feature is support for Amazon’s Alexa voice assistant. For now, this is all we can expect from this first official teaser image.