Last month, Samsung revealed the world about new and improved Galaxy A series smartphone which includes Galaxy A10, Galaxy A30 and Galaxy A50. Now, Galaxy A90 launch is expected soon as there are many leaks circulating around the web.

Two weeks ago, the company’s UK website revealed another three smartphones under Galaxy A series by listing support pages of Galaxy A90, Galaxy A40 and Galaxy A20e. But there was no official confirmation from the company. Few days back, Samsung officially launched Galaxy A20 in Russia and Galaxy A40 was launched in Netherlands.

Now, there is another confirmation regarding Galaxy A90 which is supposed to be the top model in Galaxy A series. Samsung Indonesia PR website’s article tells the benefits of Notchless displays and it clearly mentions that Notchless Infinity screen is only available on Galaxy A90. 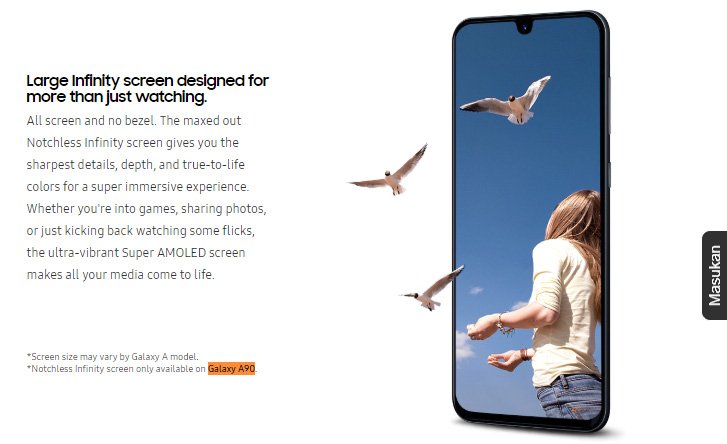 A render from trendingleaks.com shows the smartphone with Notchless infinity display, pop-up selfie camera, triple rear camera setup and in-display fingerprint sensor. Other specifications are expected that it will come with Snapdragon 710 SoC with up to 8GB of RAM and 128GB of internal storage.

Samsung has already set a Galaxy A series launch event for next month on April 10. It is highly expected that Galaxy A90 will debut in the event.

Visit our website daily for latest tech news. Follow Us on Instagram for awesome tech stuff. Also, Join our Telegram Group and connect directly with Admin.
Tags
Galaxy A90 Samsung