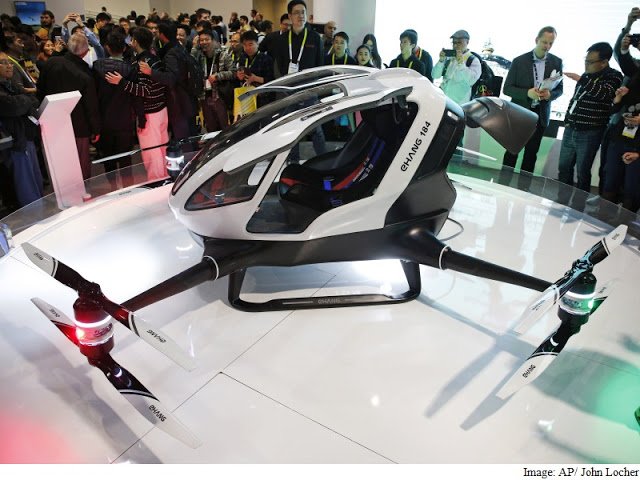 On Wednesday at CES 2016, A Chinese company, Ehang Inc., unveiled the first ever drone capable of carrying a human being.

The Ehang 184 was unveiled as an electric-power drone that can carry up to 220 pounds (around 100 KG) and is capable of flying for 23 minutes. It looks like a small helicopter, but of course, along with the four doubled propellers of a drone. The air-conditioned cabin has room for one person and is capable of being charged fully in only two hours. It also has a reading light and space for a back-pack, just because.

The passenger is required to give two commands “take off” and “land” once the flight plan has been put in order; both these commands are taken care of using the Microsoft Surface tablet. The drone is designed to fly 1,000 to 1,650 feet off the ground with a maximum altitude of 11, 500 feet. The highest speed it can reach is 63 miles per hour.

Shang Hsiao, co-founder and Chief Financial Officer for Ehang aims to sell the drone at $200,000 -$300,000 (approx. Rs.1,33,17,000 – Rs.1,99,75,500). However it seems there will be a while before the drone is declared legally safe in all aspects. The Federal Aviation Administration is already trying to regulate America’s sudden increased interest in drones. It would be interesting to see them tackle another addition to the territory.