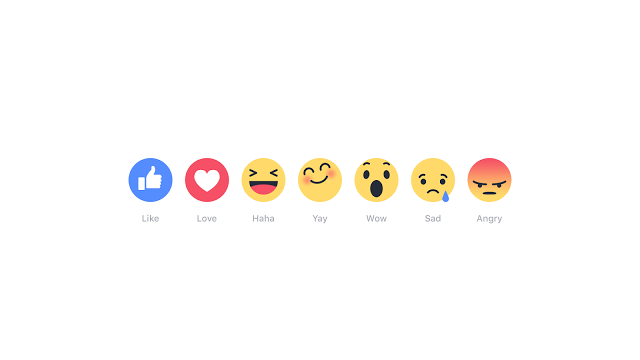 Facebook currently offers only one option for interacting with a post, the “like” button. In 2015, the social networking giant had announced that it would be adding new “reaction buttons” that would allow people to quickly convey other emotions. The reason for this announcement was that not everything posted on Facebook is worthy of a ‘Like’ and the Like button might not convey the appropriate message.

Now, Facebook has officially announced that Reactions, six small animated emojis, are rolling out as official additions to the Like button. In October last year, Facebook’s Chief Product Officer Chris Cox and his team created a final product of alternatives that Facebook CEO Mark Zuckerberg approved showing to the public.

The emojis which are angry, sad, wow, haha, and love will allow users to react in a different way to express their humor, sadness, love and awe depending on the situation.

The global rollout follows on from a period of intense local testing in Spain, Ireland, Chile and a number of other countries. According to a report by Bloomberg, the testing is now over and the new Reactions will be arriving on Facebook in the coming weeks.

According to Bloomberg’s in-depth report, the decision to update the Like button was one that involved consultation with sociologists to carefully create a range of emotions that could accurately take into account huge variety of posts that are put on Facebook.

Zuckerberg acknowledged in a statement along with the video of Reactions that this was intentionally designed as an alternative to the Dislike button, a feature that users have long been asking for.

“Reactions gives you new ways to express love, awe, humor and sadness. It’s not a dislike button, but it does give you the power to easily express sorrow and empathy — in addition to delight and warmth. You’ll be able to express these reactions by long pressing or hovering over the Like button.”

The users will be able to see the traditional thumbs-up “Like” below posts. However, to view the new emojis, you need to simply hold down on the Like button and the new range of Reactions will appear. The buttons will be animated to convey their meaning in a better way. For example, the angry button will grow red in rage. According to a company spokesperson, a sixth new button, “yay” was removed because it was “not universally understood.”

Besides giving users more forms of expression, the new buttons allow Facebook to see how people are reacting to different posts that they see in their News Feeds.