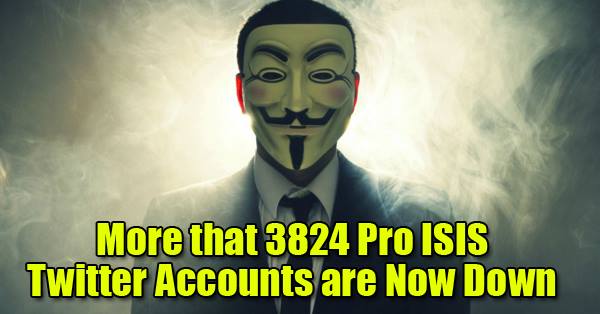 Just after one day of warning ISIS and declaring a full fledge war against them, the hacker group ‘Anonymous’ has already hunted down 3800 twitter accounts of ISIS supporters. They had launched an operation named #OpParis by opening a new official account at micro-blogging site, twitter and also set up a new website where all the accounts of ISIS will be centralized.

The website will not only solve the purpose of scrutinizing the accounts, in fact it can be accessed by anyone who has interest in searching the social media accounts of ISIS and wants to report about new supporters of this terrorist organization.

Anonymous has fought against ISIS earlier also after the Charlie Hebdo Attacks which took place in January this year, that time they named their operation #OpISIS and they hunted down tens of thousands of social media accounts of ISIS.

However, after the Paris attacks of Friday, the hacker group seems more angry and determined for bringing down the terrorist organization online as they have declared a complete war against the terror outfit. This time they have named their operation #OpParis.

Another hacker group which is known as Ghost Security Group has revealed that they tracked Bitcoin wallets which had more than $3 million and these accounts were of some known ISIS members. This revelation was made just before Paris attacks took place.
Anonymous’ efforts of hunting down ISIS accounts will also be helpful for law enforcement agencies and it will pose problems for terror groups.