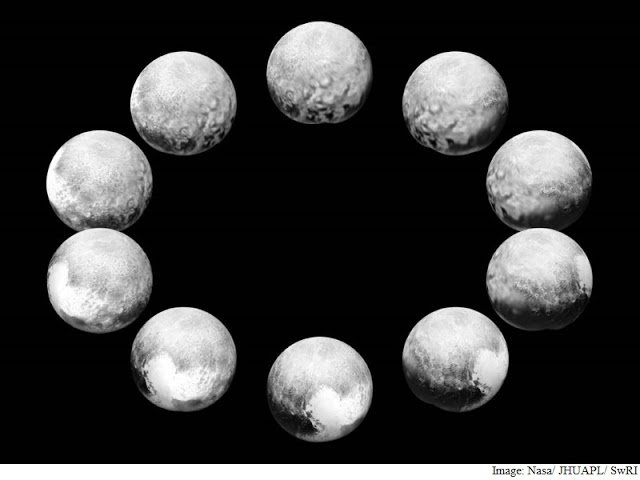 Nasa’s New Horizons probe has captured some stunning images of how the day progresses on Pluto and its largest moon Charon.

Pluto’s day is 6.4 Earth days long. The images reveal many details about Pluto, including the differences between the encounter hemisphere and the so-called “far side” hemisphere seen only at lower resolution.

The images were taken by the Long Range Reconnaissance Imager (LORRI) and the Ralph/Multispectral Visible Imaging Camera on board New Horizons.

The more distant images contribute to the view at the 3 o’clock position, with the top of the heart-shaped, informally named Tombaugh Regio slipping out of view, giving way to the side of Pluto that was facing away from New Horizons during closest approach on July 14.

The side New Horizons saw in most detail – what the mission team calls the “encounter hemisphere” – is at the 6 o’clock position.

The side New Horizons saw in most detail, during closest approach on July 14 this year, is at the 12 o’clock position.