Facebook Twitter LinkedIn Pinterest Reddit Pocket Messenger Messenger WhatsApp Telegram Share via Email Print
4 years ago, a black macaque monkey named Naruto had clicked its own selfie, which later got world-famous as ‘Monkey Selfie’. Now the copyright ownership of the selfie has reached to the federal court. The suit was filed in federal court in San Francisco by People for the Ethical Treatment of Animals (PETA) against the British photographer David J. Slater and his company, Wildlife Personalities Ltd. 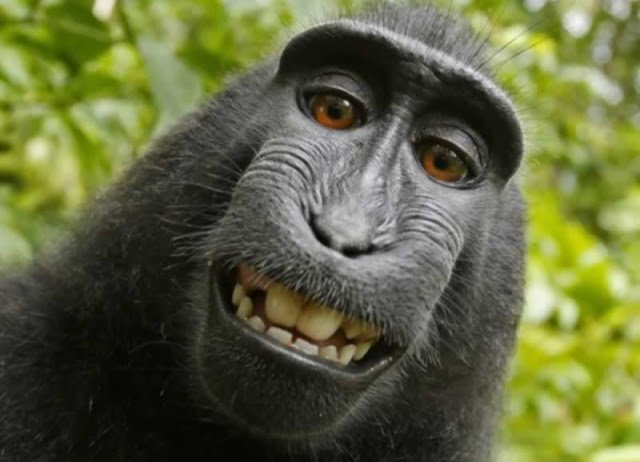 PETA says “Our argument is simple: US copyright law doesn’t prohibit an animal from owning a copyright, and since Naruto took the photo, he owns the copyright, as any human would.”  The organization further added, “It will also be the first time that a right is extended to a nonhuman animal beyond just the mere basic necessities of food, shelter, water, and veterinary care. We are also asking the court to allow PETA to administer the proceeds of “monkey selfie” sales for the benefit of Naruto and his community, without compensation to PETA”

The photos were taken during a 2011 trip to Sulawesi by British nature photographer David Slater when he temporarily left his camera on his tripod. Soon enough, the curious macaque named Naruto started playing with it and accidentally clicked some hilarious selfies.

The British Photographer said this in his own defense in an email statement, “The facts are that I was the intellect behind the photos, I set the whole thing up. A monkey only pressed a button of a camera set up on a tripod – a tripod I positioned and held throughout the shoot.”

Certainly this would be the topic of discussion for next few days on social network websites and it would be interesting to see who wins the ownership over this monkey business.

[info title=”Info” icon=”info-circle”]We are sure you might be wondering why a news about a Monkey is published on a Tech Website. Well its true a Monkey hasn’t anything to do with Technology but, a Monkey making use of the Technology to click its own Selfie got our interest so, we thought of sharing it with you. :)[/info]
Visit our website daily for latest tech news. Follow Us on Instagram for awesome tech stuff. Also, Join our Telegram Group and connect directly with Admin.