Facebook Twitter LinkedIn Pinterest Reddit Pocket Messenger Messenger WhatsApp Telegram Share via Email Print
The images of Microsoft’s premium flagships Lumia 950 which is also code-named as ‘Talkman’ and Lumia 950 XL, have been leaked. The leak comes courtesy one of the most reliable online tipsters Evan Blass, aka @evleaks, who posted press renders of both the Talkman and Cityman. 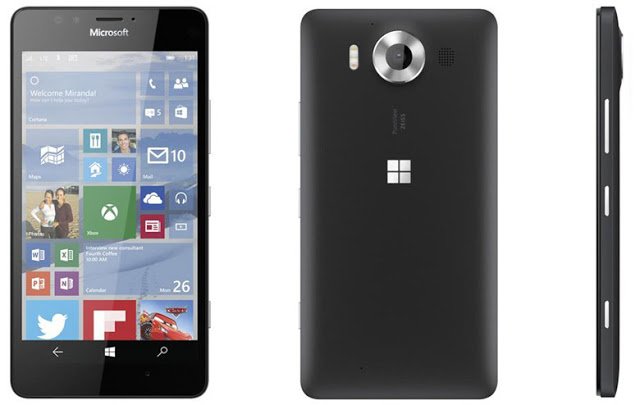 Neowin’s Brad Sams was the one who first posted the live image of the rumoured Microsoft Lumia 950 XL which is also code-named as ‘Cityman’ on Twitter. Blass followed the tweet with press renders of both the Cityman and Talkman high-end smartphones. He said, “I see your Cityman, and raise you a Talkman.”

The first leaked live image shows the alleged Lumia 950 XL in a Blue colour variant being charged and shows the home screen of the smartphone. Some of the apps visible on the home screen include Xbox, Office suite, Flipboard, Twitter, and Skype among others.

The leaked press render also shows the Lumia 950 XL smartphone’s Blue colour model. The handset is seen featuring a Windows logo on the rear panel alongside the primary camera and dual-LED flash. The right side of the handset is seen featuring physical buttons for power, volume rocker, and camera. The front panel holds the display and the Microsoft logo branding above the screen.

The Microsoft Lumia 950 (Talkman), on the other hand, was spotted in a Black colour variant. Much like the Cityman, the Talkman smartphone features the Windows logo at the rear and Microsoft Logo branding above the display. The side panel holds the power, volume, and camera button. The rear camera on the Lumia 950 looks to be surrounded by a chrome ring with the dual LED flash. Both the Lumia 950 and 950 XL smartphones can be spotted with onscreen home, back, and search buttons.

The Microsoft Lumia 950 XL is said to come with a 5.7-inch screen size with the same resolution; a 64-bit octa-core Snapdragon 810 SoC, a triple-LED flash for rear camera; a 3300mAh removable battery; a 1-mm silver ring inside the circumference of the black camera pod, and aluminium side buttons.

A report emerging from Korea recently contradicted the October launch timeline for the Lumia 950 and Lumia 950 XL smartphones. It added that Microsoft may showcase the premium smartphones at IFA in early September. Recently, a report claimed that the next flagship smartphone from Microsoft would be called the Surface Mobile.