Facebook Twitter LinkedIn Pinterest Reddit Pocket Messenger Messenger WhatsApp Telegram Share via Email Print
LG has unveiled its new foldable, wireless full-sized ‘Rolly Keyboard’. LG have planned to launch it in IFA 2015 trade show that will take place in next month in Berlin, Germany. The accessory, which LG is calling a ‘full-size keyboard for pockets’ will debut in the US in September, followed by Europe, Latin America, and Asia in the fourth quarter. The price would be announced locally. 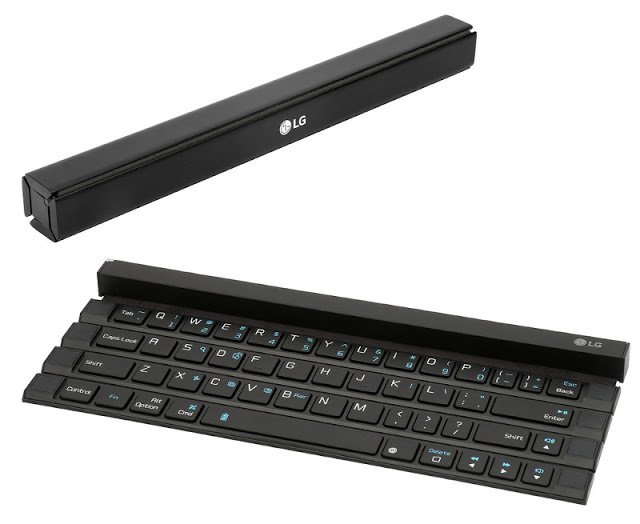 The wireless keyboard, carrying the model number KBB-700, folds up along the four rows making itself an easy-to-carry roll. The keyboard features high-contrast keys and a fold-out mobile device stand. LG said that typing on the new Rolly Keyboard is “extremely simple” because of its 17-mm key pitch, which is nearly the same as the 18-mm key pitch found on regular desktop keyboards.

The LG Rolly Keyboard is said to sport an impact-resistant durable polycarbonate and ABS plastic build. It features two foldable arms to hold smartphones as well as tablets. Users can pair the keyboard with the device using Bluetooth 3.0 connectivity, which is activated by simply unfolding it. The keyboard can pair with two different devices together and gives users the ability to toggle between the devices with single key press. LG has stated that in case of tablets, the keyboard will only pair with those which sport displays up to 10-inch. It is backed by a single AAA battery, which is rated to deliver up to three months of average use.

“LG Rolly Keyboard is just one of the many premium input devices we’ll be unveiling in the coming months as we expand our accessories offerings,” said Seo Young-jae, Vice President in charge of Innovative Personal Devices at LG Electronics Mobile Communications Company, adding, “The goal was to create a product that could add more value to LG smartphones and tablets at the same time offering a unique design proposition that hadn’t been explored before.”