Facebook Twitter LinkedIn Pinterest Reddit Pocket Messenger Messenger WhatsApp Telegram Share via Email Print
A new app named MSTY (My Song To You) allows users to send 30-second segments of songs from among the latest chartbusters, combined with a photo and text. 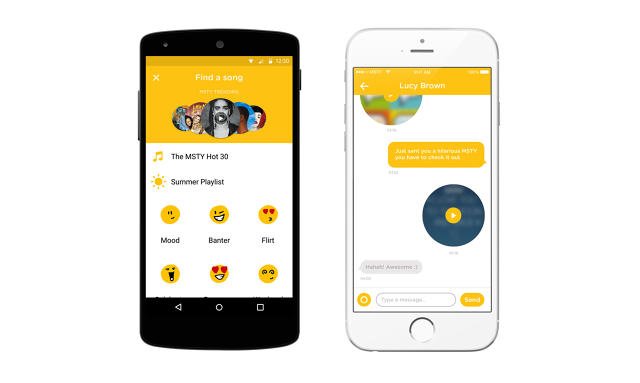 The British company has launched the app in 155 countries with a catalogue of 2,000 song clips, cut down to the most meaningful 30 seconds by humans rather than the computer algorithms that create previews on services such as iTunes.

The songs are curated into playlists by mood or genre such as flirt, celebrate, sport, pop hits and 70s music.

“People have always utilised music in a very powerful way, from film and television to advertising. Why can’t you send that emotion in a message? It seems very obvious,” the company’s founder Grant Bovey was quoted as saying by The Telegraph.

Similar messaging apps do exist – such as La-La (which sends whole songs) and Rithm (which charges users for certain functions).

But MSTY combines images and text with human-curated short music clips that are legally sourced directly from the record labels.

MSTY has signed licensing deals with Universal, Sony and Warner, providing it legal access to a whopping 22 million songs.

The app is also integrated with Apple Music. Users can click a song clip they are sent in the app to the album on Apple Music, where they are able to stream or purchase the song.

The app will help create a new revenue stream for artists who have been struggling to monetise their music in the face of digital developments in the music industry such as piracy and streaming.