Facebook Twitter LinkedIn Pinterest Reddit Pocket Messenger Messenger WhatsApp Telegram Share via Email Print
Microsoft’s Windows 10 is all set to launch later this month and the company is finalising the new features including Windows Hello, Continuum, and revamped Cortana for release on PC and tablet. The company has been lately releasing builds of Windows 10 to its limited Windows Insider programme for testing purposes. Following the approach, Microsoft earlier this week released two new builds of the Edge browser, and in the process also renamed it from Project Spartan. 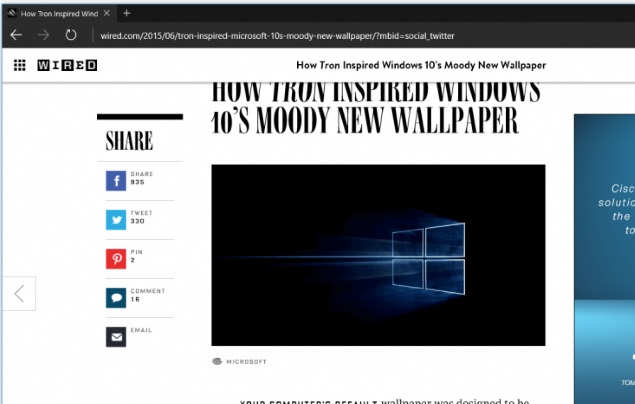 The company on Monday released Build 10158 which brought a galore of changes to the build and finally also included the new Microsoft Edge branding. Some of the new features of the Microsoft Edge browser include the option to add “home” button (which can be added via Settings > Advanced Settings and turning on “Show the home button”); the option to import favourites/bookmarks from other browsers into Microsoft Edge; options to change first screen of Microsoft Edge; new customisations for the New Tab page; newly added password and form-fill support; drag and drop tab option to a new window added, and a new dark theme added.

The company also acknowledged the top request from Windows Insiders and added an option to play audio from Microsoft Edge played while the app is minimised or in the background.

Some of the other general UX improvements and refinement include bug fixes; improved Tablet mode animations, improved support for Windows 8/8.1 apps and classic (Win32) apps in Tablet mode for Continuum. The Windows 10 Build 10158 also brought dark theme colour to Cortana. The build includes a combined left rail now and Cortana’s Notebook is in final stages. Flight tracking via emails has been also enabled, a feature that Google introduced some time back to its Google Now.

To make things even sweeter, Microsoft on Tuesday released another Windows 10 Build 10159 to Windows Insider programme.

Gabriel Aul, Engineering General Manager for Microsoft’s Operating Systems Group, explaining the reason to release back-to-back builds said, “Why two builds so fast back to back?! As you probably know, we validate builds that we produce in internal rings where they’re used by engineers in OSG and Microsoft. If they pass all of our criteria we make them available to Windows Insiders, first to fast and then to slow once we know it’s a stable build.” According to Aul, the new Build 10159 brought over 300.

Additionally, Microsoft also confirmed its new Edge browser will no longer support its own Silverlight application framework. Making the announcement in a blog post, Microsoft said, “Support for ActiveX has been discontinued in Microsoft Edge, and that includes removing support for Silverlight.”

The company however revealed that Silverlight will be supported in Internet Explorer 11, resulting in sites continuing to have Silverlight options in Windows 10.

When Microsoft in January first revealed details about its new browser for the Windows 10 operating system (then referred to as Project Spartan), the company was expected to bring galore of changes alongside a major re-branding of the dated browser. However, the new logo seems to take cues from the Internet Explorer logo.

Both the Windows 10 Build 10158 and Build 10159 came with Microsoft Edge browser’s new look which sports the ‘e’ logo. While the new Microsoft Edge browser brings several changes to the new Windows 10 operating system such as showing a site preview simply by hovering over its tab, Cortana integration, and a built in reading list among others, its logo definitely looks inspired by the company’s old but legendary Internet Explorer.