Facebook Twitter LinkedIn Pinterest Reddit Pocket Messenger Messenger WhatsApp Telegram Share via Email Print
Micromax’s subsidiary company YU has recently launched all new “Yuphoria” which is going to be a budget smart phone by the company. It will be available at the price of Rs 6,999. While there are other handsets too available in this range like Moto E 2 Gen, Xiaomi Redmi 2, etc. 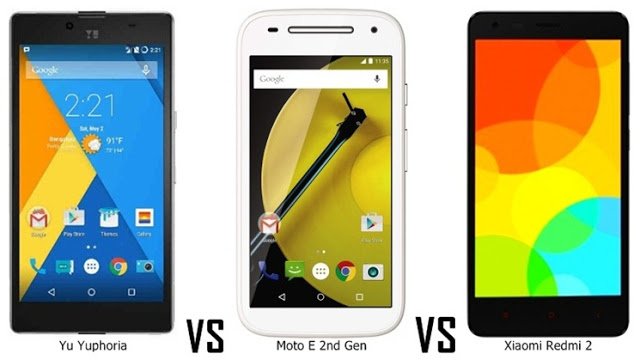 These phones offer similar features and are available at similar price which makes them a good competitor of each other.

YU Yuphoria is going to have 5” IPS LCD Display which will offer screen resolution of 720X1280p. It proffers 294ppi pixel density along with Corning Gorilla Glass 3 protection. Xiaomi Redmi 2 on the other hand comes up with 4.7” IPS LCD Display claiming 720p screen resolution. It flaunts Corning Gorilla Glass 2 protection to protect the screen and claims 312pp pixel density. Moto E 2nd Gen on the other hand is a 4.5” handset having IPS LCD capacitive touch screen with screen resolution of 540X960pixels. There is oleophobic coating with corning gorilla glass 3 protection. It includes 245ppi pixel density.