Facebook Twitter LinkedIn Pinterest Reddit Pocket Messenger Messenger WhatsApp Telegram Share via Email Print
Chinese smartphone brand OnePlus is gearing up to launch the successor to the popular smartphone OnePlus One, dubbed OnePlus Two. According to a ‘leaked’ benchmark test, a new device, which is speculated to be the OnePlus Two, could come with Android 5.1 Lollipop and sport a Snapdragon 810 octa-core processor.

The Geekbench Benchmark test for a device named OnePlus One A2001 was spotted on the site which further revealed that the device also includes a 2777MB RAM which implies that it will come with a 3GB RAM. It will also be powered by a 64-bit 1.55GHz octa-core chipset. The rumoured OnePlus Two has also received a score of 1256 for single-core and 4093 for multi-core. 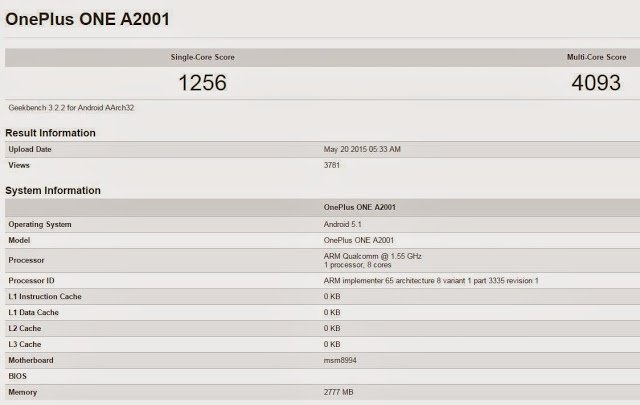 This news should not come as a surprise as OnePlus CEO Peter Lau earlier this month had hinted at the presence of a Qualcomm Snapdragon 810 processor in the upcoming smartphone along with its price, as reported by Gizchina. The device is also rumoured to sport a 5.5-inch QHD display with a 1440 x 2560 pixel resolution.

The company also released its own custom ROM – the OxygenOS – for OnePlus One users. Those interested in flashing the new OS can download the update from OnePlus’s microsite.