The new feature is only available to Lollipop users, though you don’t have to be on a stock ROM in order to get it. However, activating it does seem to require the latest Google Play Services version, 7.0.97. 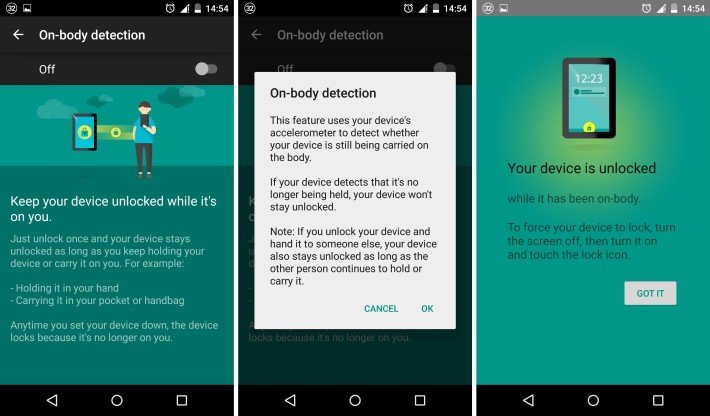 Here’s how it works. The “On-body detection” feature can be turned on from the Smart Lock section of Security settings. Once switched on, the device will stay unlocked as long as it detects that it’s being held or carried in a pocket, handbag, or the like. When the phone is set down (movement is no longer the detected) it locks up, so the next time you pick it up you’ll need to enter your PIN, password, or pattern.

On-body detection will bring down the number of times you have to unlock your device in a day, especially if you’re on the move a lot. If you’re like me, sitting at a desk all day, the effect will be less visible, but you may still find it useful.

Obviously, the phone can’t tell (yet…) whether it’s you or someone else carrying the phone. If someone steals your device from your pocket or purse, they will be able to sneak through it without any restrictions. So if you want the very best protection, it’s better to keep this feature off. However, the thief won’t be able to disable the lock screen, and the moment the phone stops moving it will lock up. Plus, most phones are stolen when they are left unattended anyway.

We’ve tested the feature on a Nexus 5 running 5.0.1, and it works as it’s supposed to. Personally, We will activate on-body detection on my devices from now on – the convenience it adds trumps the small security risk it opens.

Given that the feature is not present on all Lollipop devices, on-body detection appears to be activated on a per-user basis. Note: if you’re not on the latest Play Services version, you might see a different entry in Smart Lock, called “Trusted behavior (experimental).” This appears to be the old name of On-body detection; as soon as you get the update Play Services, it should switch to the new name.

Let us know if you’ve got the feature and if you’re going to set it on.