Facebook Twitter LinkedIn Pinterest Reddit Pocket Messenger Messenger WhatsApp Telegram Share via Email Print
The definition of entry level smartphones has been undergoing a sea-change since the last year. And this year, Lenovo added another feature to the already-crowded entry level smartphone segment – with the addition of the 4G LTE enabled Lenovo A6000 at a Rs 6,999 pricing. Lenovo announced the A6000 at CES and up to that point, the cheapest 4G smartphones that we had seen were the Rs 8,999 Yu Yureka and the Xiaomi Redmi Note 4G at Rs 9,999. While 4G networks are still found in only limited circles across the country, it is just a matter of time before it goes mainstream. Hopefully, we will see more 4G circles activated this year. So one can say that Lenovo has released a budget 4G smartphone at the right time. But at MWC, we already saw the announcement of the Lenovo A7000, which is quite strange. Let us see if the Lenovo A6000 is worth purchasing.

Lenovo A6000 comes with a 5-inch display and for an entry level phone, it has a decent design. Of course, the budget sacrifices the Corning Gorilla Glass 3 protection. The rear-cover is plastic and quite flimsy in nature, prone to easy flexing. But I liked the rubberised feel on it, which helps with a good grip on the phone. The volume-rocker and the power/standby buttons are located on the right hand side and on the top you have the 3.5mm audio jack along with the microUSB charging/data transfer port.

The Dolby speaker section is located on the rear side at the bottom, whereas on the top left hand corner you have the 8MP camera along with the LED flash unit. The glass display on front has soft buttons located at the base. The phone weighs 128 grams and is 8.2mm thick.

Considering this is a budget device, the phone comes with modest internal specs. It is powered by the Qualcomm Snapdragon 410 SoC which has a 1.2GHz quad-core Cortex A53 processor along with Adreno 306 GPU. This is paired with 1GB of RAM. On the storage front, you have 8GB of which 3.33GB is used by the system and the rest is available to the user. You will have to expand the memory if you like to store a lot of apps or data on your phone. The microSD card allows you to put in a 32GB microSD card. 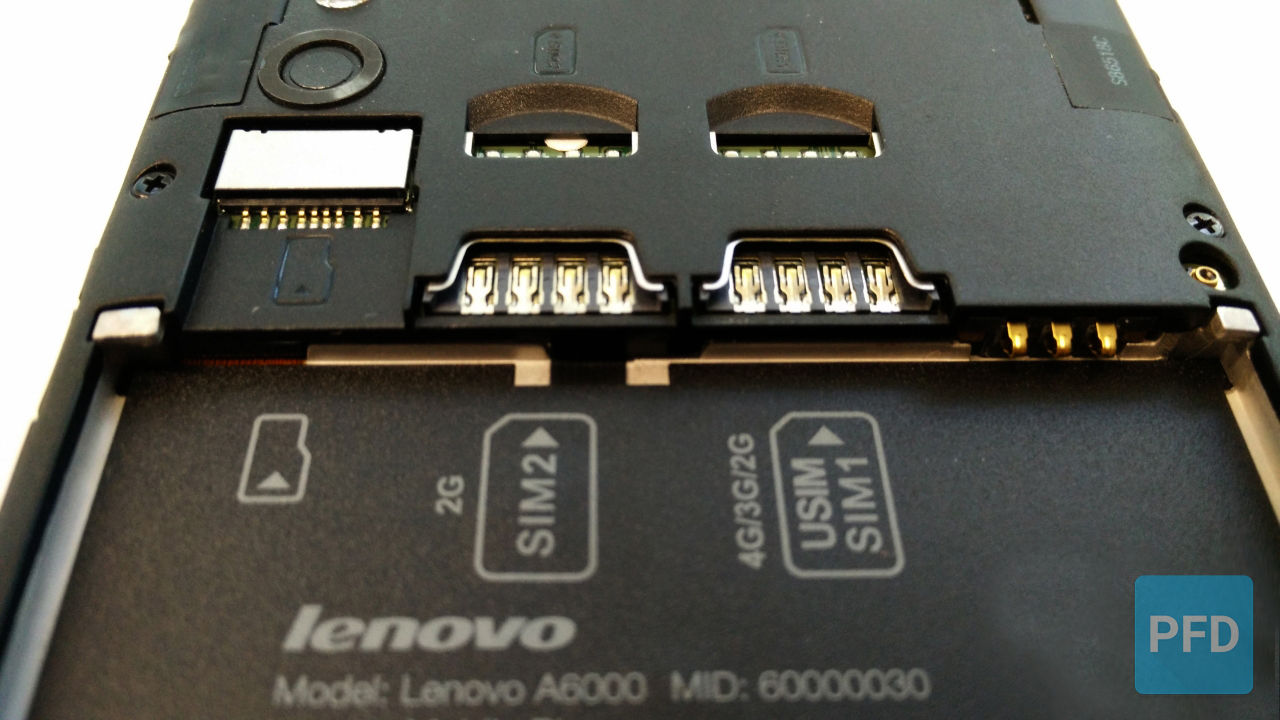 Lenovo A6000 has a dual-SIM configuration on which only one SIM can take in either a 3G or 4G sim card. It runs on Android 4.4.4 KitKat OS with the Lenovo Vibe 2.0 skin on top of it. The 5-inch display comes with an HD resolution and has an IPS panel. There is an 8MP rear camera and a 2MP front-facing camera. There’s a 2,300mAh removable battery.

Lenovo A6000 comes with the Lenovo Vibe 2.0 skin atop the Android 4.4.4 KitKat OS. It lacks an app drawer. It comes with a lot of pre-loaded apps such as txtr ebooks, Guvera music streaming app, Theme along with some game apps such as Frog HD, Asphalt 8 and so on. Lenovo’s proprietary apps such as Security, SYNCit and SHAREit are also present and cannot be removed. This is part of Lenovo’s DOit apps. The default theme is an overdose of colours which some may like and some won’t. As the name implies, SYNCit lets you back up your contacts, SMSes and call logs to the cloud.  SHAREit lets you transfer photos, videos, documents and so on using the phone’s Wi-fi channel – similar to Wi-fi direct. It works with Windows PCs and iOS devices. You can quickly change the phone’s profile while adjusting the volume as it shows up the Silent/Meeting/General/Outdoor profile icons just below the volume slider. There are 14 quick notification icons under the notification tray. Settings menu looks like any stock Android settings menu, except that with the A6000 you get more colourful icons and a white backdrop.

Lenovo A6000 houses the Qualcomm Snapdragon 410 SoC which has a 1.2GHz quad-core processor. It gave scores that were similar to the Xiaomi Redmi 2 considering that both phones house the same processor and RAM combo. AnTuTu gave 20182 and Quadrant gave 11280 pts. The Geekbench 3 single core score was around 483 which was similar to the single core score seen on the HTC Desire 526G+ as well as the Xiaomi Redmi Note 4G. Of course the multi-core scores are much higher for the other two phones.

Call quality is quite good and I did not face any issues. I couldn’t test the 4G capability as Mumbai is yet to come under the 4G circle of supporting telecom service providers.

The phone performs most tasks without a hitch. I did not notice any lag while swiping through home screens or switching between apps despite the Vibe 2.0 skin. While playing games, the Asphalt 8 ran without any issues, but installing it will immediately show you the ‘Running out of storage space’ symbol. The heating is under control when playing heavy games or while watching videos.

It could playback most video formats with the default player but struggled with 1080p files. The speakers are surprisingly loud and the Dolby app lets you tweak the audio according to your liking. The bundled earphones are mediocre and you will have to invest in a good pair.

Thanks to the IPS panel, the 5-inch HD display of the Lenovo A6000 has great viewing angles. The display is bright with sharp colours. When held at a regular distance, you will not notice any pixellation. The display is a finger-print and smudge magnet and you will need to be constantly cleaning it. The phone package bundles a screen protector. The LCD display means that the display does not give the best blacks. However, I did not notice any backlight bleeding while watching videos on the display. Legibility in sunlight is good, although you will most likely need to set a higher brightness level.

For an entry level smartphone, the Lenovo A6000 sports an 8MP rear camera along with a 2MP front facing camera. While that may look impressive on paper, the output leaves a lot to be desired. The regular camera is strictly average and captures enough detail to let you share the image on phones. But a closer inspection will reveal some patchy areas. The HDR mode isn’t impressive at all and tends to overexpose the entire image instead of balancing the shadows and highlights. Low light photos lack details. Videos showed a lot of screen tearing and noise as well. On the whole the camera is not the strong point of the Lenovo A6000.

The PC Mark for Android app kept crashing with the Lenovo A6000, so we did our 8-hour loop test which involves two hours each of calling, video streaming, video playback and audio playback. At the end of the loop test, there was around 28% battery remaining. This gives it enough juice to run a day on regular use case.

Verdict and Price in India

Lenovo A6000 has started a new trend – 4G enabled entry level phones. While the 4G feature is great as a future-proofing feature, I was quite surprised by the quick launch of the Lenovo A7000 earlier this month. As a stand-alone entry level phone, the A6000 ticks the right boxes. The 5-inch HD display will be liked by many over the 4.5-inch qHD display on the Moto E, for instance. It makes for a good first smartphone purchase.
Of course at the low price, you do get some drawbacks such as no Gorilla Glass protection, poor camera, flimsy rear cover and so on. Lenovo A6000 has some competition in this price bracket as the second gen Moto E and the Xiaomi Redmi 2 are both priced at Rs 6,999 as well. We are testing the Moto E and the Redmi 2 at the moment and would reserve the final verdict till those reviews are done.

If you leave apart the 4G feature, the A6000 is like any other entry level phone. I liked the fact that Lenovo isn’t charging a premium just for the 4G feature.