Facebook Twitter LinkedIn Pinterest Reddit Pocket Messenger Messenger WhatsApp Telegram Share via Email Print
WhatsApp has rolled out its new free voice-calling feature to a few users India which appears to be available on invite-only basis, as of now. The invite-only basis basically means that users will get a call through WhatsApp from someone who already has the feature updated. The feature is also restricted to Android only and you will need the updated 2.11.508 version to access the app.

A report by GSM Arena pointed out that one Reddit user called pradnesh07 was able to get the feature activated on his Nexus 5 smartphone running on Android 5.0 Lollipop.

He posted saying that, “I can’t seem to send invites to other people, the only thing I can ensure is that it works in India for people running Lollipop 5.0.x on a Nexus 5. Other Indians without the earlier combo don’t get it.”

According to the images posted, users who receive the voice-calling feature will notice an icon for it, beside the Chats and Contacts tabs. The call interface seems to quite similar to a smartphone’s contact directory. The app keeps a record of recent WhatsApp calls as well. 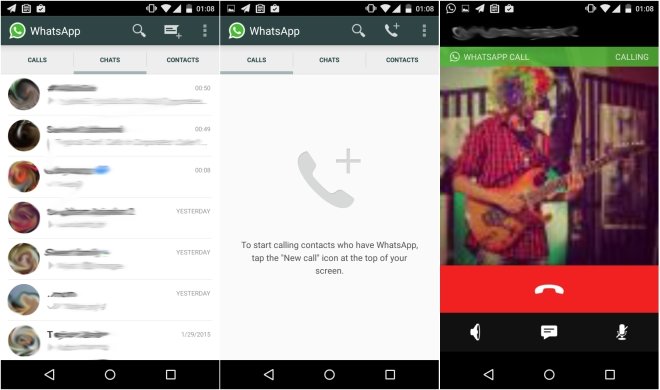 Earlier, a few WhatsApp screenshots showcasing this voice-calling feature were leaked online by Androidworld.nl. WhatsApp also released WhatsApp for Web users which simply mirrors whats’s on your smartphone to the screen. WhatsApp for web is currently available through the Google Chrome browser and also supports Android, BlackBerry and Windows Phone. However iOS users can’t access WhatsApp for web.

WhatsApp’s voice-calling roll-out comes soon after rival Indian app Hike rolled out for free voice-calling on 2G and 3G for their app. Of course in terms of user engagement, WhatsApp is ahead of it rivals. Facebook, which bought WhatsApp last year, recently revealed that the app has 700 million monthly active users and that over 30 billion messages are shared on WhatsApp everyday. With voice-calling feature coming soon, it’s likely that WhatsApp’s engagement number will rise further.